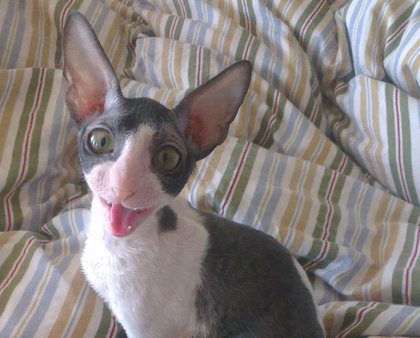 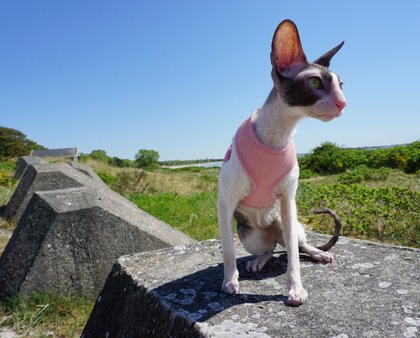 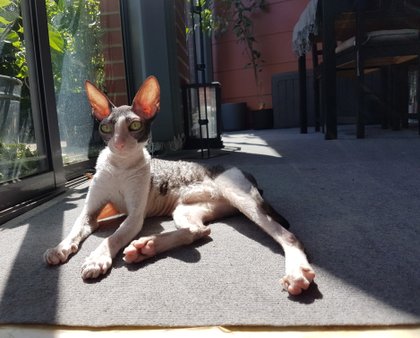 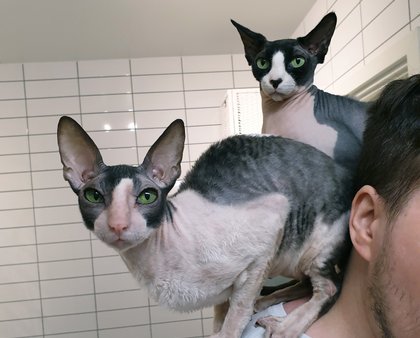 It all started on that winter day in February 2013. My ex-partner and I were going to meet Kira for the first time. We had been forewarned that we were going to meet a very scared cat, they told me that she always hid. The breeders had told us that she was actually going to a breeding on the other side of the Baltic Sea, more specifically to Estonia. They said her appearance was 100% perfect for a Cornish Rex but that her fearful behavior would never work as a cat mother. Therefore, they wanted to find the perfect cat family for her instead. They also pointed out that she was never allowed to go to a home without a feline friend.

We got into the car and the snow drifted down. The car tour would go between Hököpinge to Kivik (south Sweden). A distance that would normally take 1.20 hours took 3 hours instead. The closer we got to Kivik, the worse the weather got. Significantly more snow had fallen there compared to our home in Hököpinge. The snowbanks that had been shoveled up by the plow trucks were over a meter high. After a while we turned onto a dirt road that was along the fields and after a 5-minute drive we finally arrived at Kira's house. When we tried to open the car doors, we really understood how much snow had fallen to the ground. The powdery snow reached all the way up to the doorstep.

The breeders met us in the doorway and at the same time as we stepped inside, surely 10 kittens stormed us. I recognized that kitten-energy from Cooper. But I didn't see Kira together with all the other little energy-filled babies.
"She always hides when new people come to visit," one of the breeders said.
As we walked into the living room with the cats hanging from our pants, I thought of one thing. Would it really work with such a scared cat together with Cooper who was extremely social and loved attention.

After 30 minutes, we hadn't even seen Kira. She was probably still hiding from those two scary humans who had just entered her house. But as we sat there having coffee with the breeders, I saw a kitten coming running across the living room floor at full speed. I didn't have time to reflect on what was happening before there was a cat sitting on my shoulder. The breeders looked at each other in surprise. "It's never happened before." They continued "At least now you've met Kira, because she's the one sitting on your shoulder". I looked up on her and saw the smallest cat I'd ever met, she weighed so little I barely felt like she was sitting there. I knew that she weighed a little because the breeders had told me that they had to hand-feed her. The other cats had pushed her away when they were about to eat. But her small body size surprised me anyway.

The breeders who were still a little shocked looked with a smile at Kira who sat proudly looking out over the kitchen table. I felt her purring vibrating down to my shoulder. When her emerald green eyes met my gaze, it felt like we had always known each other.

The breeders told us that there were more people interested in Kira and that they would get in touch as soon as they had made up their minds. The drive home from Kivik was a nervous drive, not only because of the blizzard but also the uncertainty regarding Kira. I was hesitant before I met kira if she would work together with Cooper. But those thoughts weren't there anymore. The Kira I saw sitting on my shoulder would be a perfect match togther with him.

But luckily, we didn't have to wait long before we got an answer regarding Kira. The phone rang before we had even gotten home. They told me that they wanted Kira to move in with us. The only requirement they had was that they wanted to be around when Kira changed home.

I understood them, Kira had become like their child. All those hours they'd had to hand-feed her. She had also slept inside the breeders bedroom because they were afraid the other cats would be dumb to her.

When they came to our home in Hököpinge together with Kira in February 2013, I just felt a great joy. Finally Cooper got a friend before he demolished the entire apartment with his energy. And Kira got her first cat friend, a friend who would give her much better confidence.

The breeders wanted Kira to stay in the cage first for a while before we let her out. Mostly if they were to start hissing and getting mad at each other. But such a thing never happened. Cooper walked right up to the cage and started talking to Kira. They sat there looking at each other. We saw pretty quickly that these two cats were curious about each other. After only five minutes we opened the net to the cage and Kira rushed out and Cooper after. They chased each other and played throughout the apartment. I could see the joy in Kira's eyes that she finally didn't have to be that scared kitten. She had instead become the queen in her new castle.

I'll always remember that scared Kira who had probably died out in the wild. How she then evolved into who she is today. Along with me and Cooper, she became that determined lady with integrity that no one bullies.

Kira and I need each other in so many ways. Above all, we are each other's angels without wings. When I hit the bottom mentally in 2016-2017 (read more), she was the one who changed her behavior because she was worried about me. She kept a watchful eye on me and when she didn't see me, she got worried and started screaming. We were simply meant for each other.

Thank you Kira for being in my life!