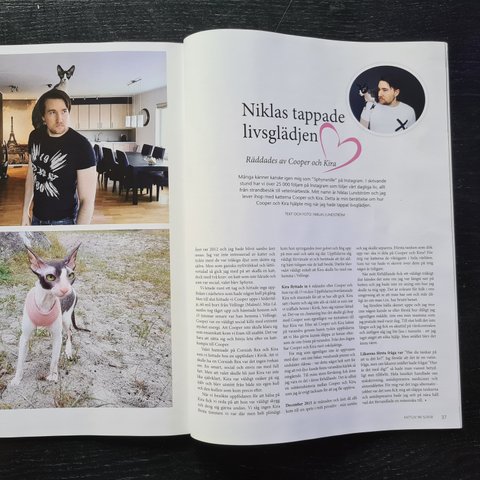 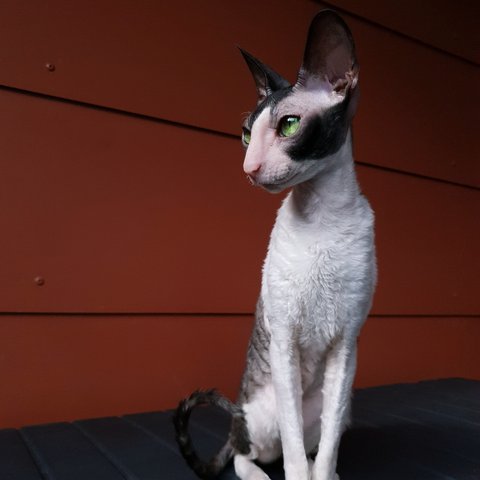 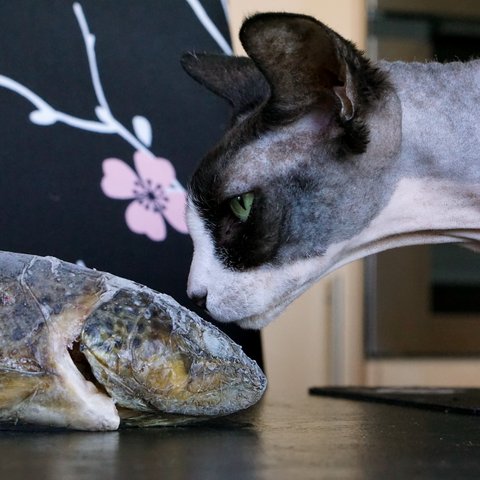 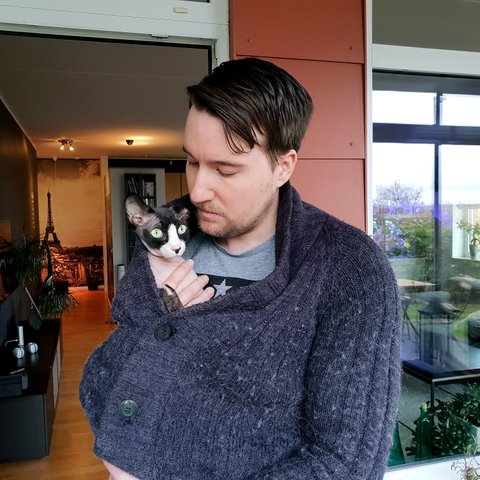 My name is Niklas Lundström, many probably recognize me as "Sphynxnille" on Instagram. At the time of writing, we have over 25,000 followers on Instagram who follow our daily lives, everything from beach visits to veterinary visits. So I live with Cooper and Kira, Cooper is a Sphynx who is 6 years old and Kira is a Cornish Rex who is 5.5 years old. This is my story about how Cooper and Kira helped me when I had lost the joy of life.

The year was 2012 and I had become a cohabitant the year before. I was not interested in cats and mostly thought they were boring animals. I was easily persuaded, I agreed to get a cat, but with two requirements. A cat that did not have fur and that was social, the choice was Sphynx. We searched around for a while and found no breeders nearby. But we found Cooper in Södertälje, 600 km away from Vellinge (Malmö). My ex partner took the train and picked him up and 13 hours later he was at home in Vellinge. Cooper was a very social guy with extremely much energy.

We quickly came to the conclusion that Cooper would not survive as a lone cat. The choice ended up on Cornish Rex and Kira which we found at a breeder in Kivik. There was no doubt that we would have a Cornish Rex, a smart, social, stubborn and a breed with full speed. But that the choice would be just Kira was not as obvious, Kira was very insecure about herself and was expelled from both her own parents and siblings. When we visited the breeder to see Kira, we found out that she was very shy.

We did not see Kira the first hour we were there, but all of a sudden she came running across the floor and flew up on my shoulder and sat down there. The breeders looked very surprised and said that it had never happened before when they had visitors. Therefore, the choice was very easy that Kira would live with us at home in Vellinge.

Kira moved in 6 months after Cooper moved in, she was 15 weeks old. The breeders followed and handed her over and stayed to see how everything went. Kira sat in the cage and did not look at all as scared as when we met her in Kivik, she looked almost relieved.

We did not know how the two would work together, Cooper was really the opposite of how Kira was. After Cooper and Kira smelled each other through the cage, the breeders thought we could let her out because they did not ”scream” at each other. From that day, Cooper and Kira have been inseparable. For me who did not really grow up with animals unless fish, walking sticks and budgie, this was something completely new to me, that two animals could find each other's love so immediately. To my great surprise, I also got to be a part of their relationship.

So it's a sunshine story between Cooper and Kira, which I'm eternally grateful to experience. December 2015 is the month and year when everything came at its peak in my private life, my partner and I would separate. The first thought that came to my mind was, should we share Cooper and Kira? They were the most important thing in the whole world. Luckily we had written them over on me a few years earlier.

When my relationship came to a very sad end, it felt like I was at the bottom and I had no idea how to get up. It is more difficult for people around you to see that you are feeling bad than if you e.g. broken leg. I tried to keep my mind up and I didn´t think anyone could see or understand how bad I really felt, not even my mother who I talked to every day.

I got an emergency appointment at the health center and finally I saw some light in the tunnel, that I had taken the step to seek help. But instead it got even worse, the doctor's first question was "Do you have thoughts of taking your life?". I understand that it is a routine question, but if he had instead asked "How are you?" then you would have won much more trust. The whole visit was about sick leave, antidepressants and sleep medicine. For me, this was not an option, my work helped me to get better thoughts and antidepressants I had seen up close what it turned a person into. I managed to get a time to a psychologist which I went to three times.

In all this chaos, my best help was Cooper and Kira, without them even knowing about it. Cooper and Kira were always there at home and gave me all the love I needed and they did not have to ask me if I had a good day, because they saw that I did not have any good days at all.

I also noticed that Cooper and Kira were affected by how I felt. Those who have had animals may recognize how the animals change their behavior when they see that master/mistress is not really as usual. Cooper became much calmer and very proper, he used to knock out full glasses of water, fly like a rocket among the plants and try to steal my food, instead he sat on my lap with the food right in front of his nose.

Kira has always been proper, now she started screaming when she didn´t see me. She could lie inside my shirt for hours and sleep, she barely walked on the cat box and almost forgot to eat. There were many mornings I would never have gotten out of bed if I had not had the cats by my side. No matter how bad day I had, it was in my head that Cooper and Kira would never suffer over everything that happened. They would never have to go to their cat box without it being cleaned, have an empty food bowl or old water. They "forced" me to get out of bed and start my day. Like so many others who have been depressed, I thought, what is the point of life? I found my meaning in life through Cooper and Kira. To come home to two cats who rushed to the door as soon as you put the key in the lock, to see them change their behavior due to how I felt and that they always gave / give true love.

Just playing with them for an hour made me disperse thoughts. In my world, animals see so much more than what we humans see about each other's moods, they notice immediately when something is not right. Cooper and Kira noticed when I started to get on my feet again in the beginning of 2017, Cooper returned to knocking out glass as usual and Kira stopped screaming. But love is of course still there, if not even stronger than it was before. We went through it all together and today I still have two cats sleeping under my shirt and licking my face at night.

After experiencing all of this, I began to nerd myself into the subject of depression and pets, whether Cooper and Kira really helped me through this or whether I was just painting my own reality. There is a wealth of research on the subject. A psychologist named Alan Entin sums up the ability of pets to improve the mood of us humans with two words "unconditional love".

Psychologists, veterinarians and researchers strongly agree that pets help many people suffering from mild to moderate depression, that it can alleviate the symptoms but not cure the depressive symptoms. I can only speak for myself but in my case it was about buying time, as my mother usually says "time heals all wounds", I needed a year to find my way back to myself. I do not think Cooper and Kira cured my depression, but they dispelled the thoughts and gave me the "unconditional love" I needed to get back on track.

Alan Entin also says that pets relieve loneliness and that in depression it is very easy to withdraw. I closed all my doors to humanity for over a year, I had my mother and two friends, but I did not always want to dwell on my problems with them. Instead, Cooper and Kira had to line up as listeners. Something that helped me a lot was that my cats are very contact-seeking all the time and never leave me alone. Cooper and Kira can sit on my lap for hours and just be petted. Alan Entin also talks about this, that pets help one to shift focus from their problems.

There is also research on Oxytocin which is a substance in the brain that is released upon friendly, physical contact. This substance can e.g. reduce anxiety. I'm not a researcher but maybe it was so that Oxytocin and shifting focus helped me dispel the thoughts and get the peace I needed for the moment.

This is my tribute to Cooper and Kira and to all the pets out there who help us through life. Unfortunately, life goes up and down, sometimes you laugh one minute and cry the next. Show your love for all animals and I promise that you will get so much more back from them, because when your whole life collapses, the animals are always there and just waiting to give us "unconditional love".

Take care of you / Niklas, Cooper and Kira

Lives: Apartment in Vellinge outside Malmö.