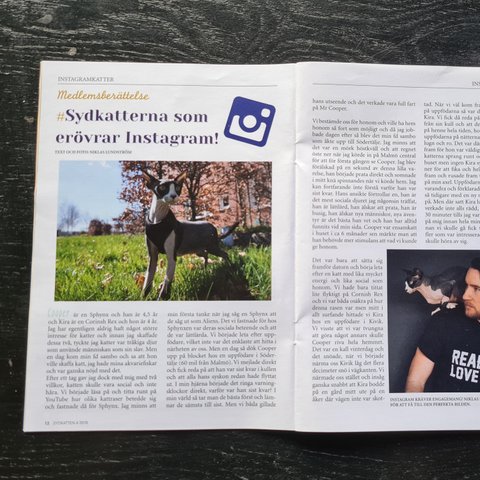 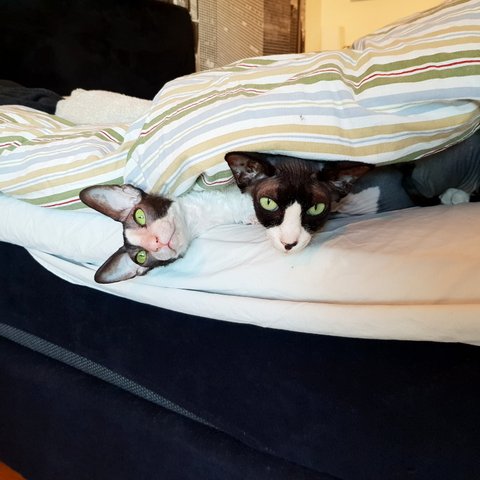 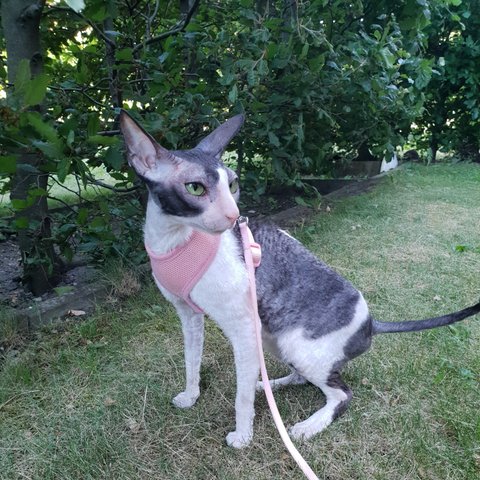 Cooper is a Sphynx and he is 4.5 years old and Kira is a Cornish Rex and she is 4 years old.

I have never had any interest in cats before I got these two, I thought cats were boring animals that used humans as their slaves. But one day my ex partner came and said she wanted to get a cat, I had my aquarium and was quite happy with it.

After a while, I said OK to one cat with two conditions, the cat would be social and not have fur. We started reading and searching  around on Youtube how different cat breeds behaved and after a while we found Sphynx. I remember my first thought when I saw a Sphynx that they looked like Aliens. What we liked with Sphynx was their social behavior and that they were smart. We started searching for breeders, which was not the easiest to find near us.

But one day Cooper showed up on a selling site on Internet, a breeder in Södertälje (600 km away). We e-mailed directly and found out that he was last left and that all his siblings had already moved out. In my brain, alarm bells started ringing, why was he the last one left? In my world, you take the best first and leave the worst at last. But me and my ex partner liked the way he looked and we saw that he got 100% energy.

I worked the next day so it was my ex partner who went up to Södertälje. I remember that it was a dark autumn evening and it rained a lot when I drove into Malmö central to see Cooper for the first time. I fell in love in a second of this little creature, he started talking right away and fell asleep in my lap purring as we drove home. I still can't understand why he was the last one left. His face enchants you, he's the most social animal I've ever met, he's smart, he loves new people, he's mischievous and new adventures are the best he knows. Cooper was the lone cat in the house for about 6 months after a while we saw that he needed more stimulation than we could give him.

We started searching for a friend to Cooper. We had searched a bit on Cornish Rex and we didn't know much about the breed, but all of a sudden we saw Kira on the Internet. We knew we had to do something or Cooper would destroy the whole home. It was a cold winter day and it snowed, when we started to approach Kivik there were several inches of snow on the side of the road. We approached the place and realized quite quickly that Kira lived on a farm in the middle of a field. Once we arrived and had visited the breeders, it was time to visit Kira.

The breeders told me that Kira was ostracized by her siblings and that the other cats bullied her. She slept with the breeders at night so she could have peace and quiet. That's why she didn't rush up to us because she was very careful. The other cats were running around and there was 100% energy in the house but no Kira was visible. We sat down for coffee and all of a sudden Kira came up and rushed up to me and sat down on my shoulder. The breeders looked at each other and explained that she had never done so before with a new person who had visited them. But there Kira sat calmly on my shoulder and did not seem at all afraid, she sat safely there for 30 minutes until I had to move before my whole body fell asleep. Before we were due to leave, we were told that there were more people interested in Kira and that they would get in touch.

The whole drive home we talked about Kira and how good friend she was going to be with Cooper, how did we know? Because Cooper loves all animals and people. It felt like a long wait before we heard anything from the breeder, but two days later they called us and told us that of course Kira should move in with us. A few days later it was time, the breeders wanted to hand her over in our home and visit Cooper.

She was sitting in a small cage and wasn't nearly as scared as when I last met her, she looked almost relieved. We put the cage on the floor and Cooper came like a rocket flying across the floor to see what was in there. The breeders told me that she had to sit in there until the two smelled each other and maybe stopped fighting. But it never happened, they smelled each other and they started talking directly about something that we humans didn't understand. You could see that she wanted to come out and he wanted to come into the cage. After only a few minutes we let her out and they started playing right away, just as they always knew each other.

Since that day, they've always been friends. They always sleep together. Since the day I saw Kira for the first time, she's always loved sitting on my shoulder.

1 year ago I started my Instagram account, mostly as a fun thing. I started by posting pictures of training, nature cars, etc. One day Cooper got to make an entrance on Instagram and he made a success right away! I had fewer followers than I got likes on the first picture. A few days later, Kira had to do the same thing there, more likes than followers. I got likes from all over the world; USA, Russia, Thailand, Japan, China, France, Peru, Egypt, etc. The number of likes increased and the number of followers increased by about 200 per month at the beginning. I began to realize that my two animals were loved by people from all corners of the world.

I remember uploading my first picture with the cats on my shoulders, over 1000 likes and nearly 200 followers in one day. I got lots of messages on Instagram after that picture. Many thought I was a girl because it seemed rare with guys / men who had these two breeds. This started everything, people around the world wanted to follow our everyday lives. Today I have 12,000 followers and it increases by about 1,500 per month.

Sometimes I wonder what is so special about us, why do people want to follow us? I spend several hours on some pictures and sometimes I tap over 500 photos and then pick out one good picture to post on Instagram. And of course, people think Cooper and Kira are two cuties. It's pretty easy to see in my pictures how much we all love each other. The relationship Cooper and Kira have with each other seems very unique.