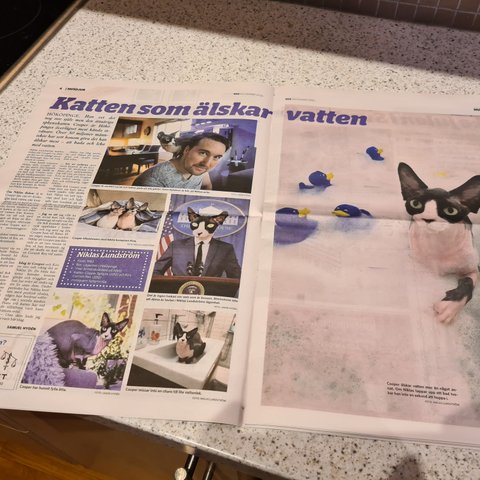 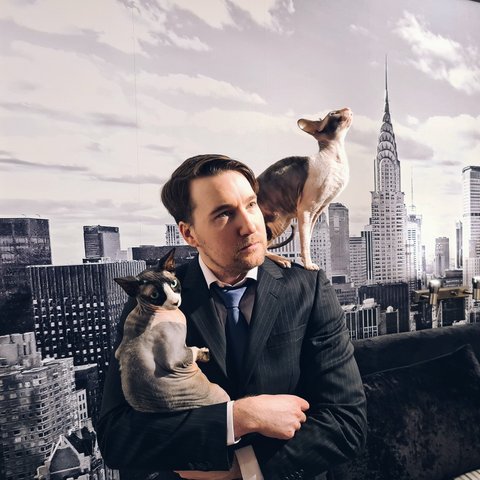 He probably doesn't know it, but the eight-year-old sphynx cat Cooper is Hököpinge's most famous citizen. Over 30 million people have seen him do what he loves most – taking a bath and playing with water.

Niklas Lundström noticed already when Cooper was a kitten that he was a very special kitten: he was obsessed with water.

- Some cats tolerate water, but Cooper is actively seeking it. It started one day when I was going to take a bath and Cooper sat on the edge of the bathtub and started splashing the water with his paw. Ever since then, he has been doing the same thing with all the water he can find, says Niklas Lundström.

If Niklas washes dishes, Cooper is there, if a drinking glass with water is on a table, Cooper is there and Niklas can not even brush his teeth without the cat being there and playing with the water from the tap. Niklas even had to buy a life jacket for Cooper because he usually jumps into neighbors swimming pools.

- He loves water but he can´t swim so well, says Niklas laughing.

In just one month, he gained 1,500 followers and he noticed that the number of followers and views was high every time he posted a video or picture of his water-loving cat, so he began to focus more and more on the account of his cats. He gained followers from all over the world and soon he was also contacted by the media who wanted to write about him and his cats.

Today Niklas has almost 60,000 followers on instagram and the number is growing all the time.

- One of the purposes of my account is to counteract the prejudices that exist against Sphynx cats. I want to show that the breed is not only healthy and cheerful but also friendly, curious and sociable, says Niklas.

Niklas got Cooper as a kitten in 2012 when his ex partner wanted to get a cat. Niklas didn´t grow up with cats and had not considered getting one himself, but agreed to it if he was allowed to participate and choose a breed.

- I said I wanted a social cat and avoid vacuuming so the choice was easy.

They got in touch with a Russian breeder in Södertälje (5 hours with car from where I live) and took little Cooper home to Skåne. After a few months, Niklas noticed that Cooper could not be alone, so he decided to get another cat, a Cornish Rex named Kira.

Today, Cooper and Kira are an important part of Niklas life. The two cats give him joy and security and he can´t imagine a life without them. At times, Niklas has struggled with anxiety, something he has writing/talked about on social media. His two cats have been his main support.

- Without them, I would not be here today.