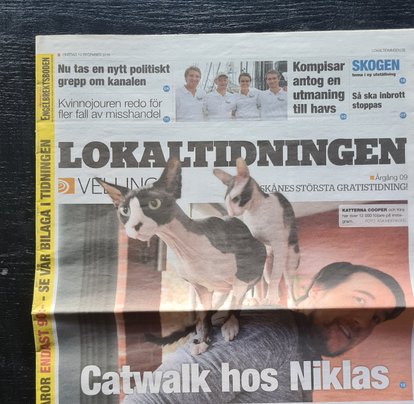 Niklas Lundström did not even like cats from the beginning. Now Cooper and Kira not only give a gilt edge to his everyday life, they also share it in a very concrete way.

It was Niklas ex partner who persuaded him to get a cat. The requirements were that it should be sociable, says Niklas.

The choice fell on Cooper, a Sphynx, also called a naked cat because it has only a little fur on its body. After six months, the Cornish Rex female Kira was also added. They became best friends almost immediately and they take care of each other every day.

Niklas was also charmed by their playful and friendly manner almost immediately.

They are so affectionate and at the same time very entertaining. And smart. They love to chase light rays and never got tired when I played with them with it. But when I bought a toy that automatically scattered the light rays because I could not play with them all the time, they approached it and slammed it and refused to chase the light rays.

To save his friends from all the cat pictures he posted on Facebook, Niklas started an Instagram account a year ago. We got 1500 followers in one month and now we are up to 12,000, it's fun. I have developed a great interest in photography, thanks to the cats, says Niklas and laughs.