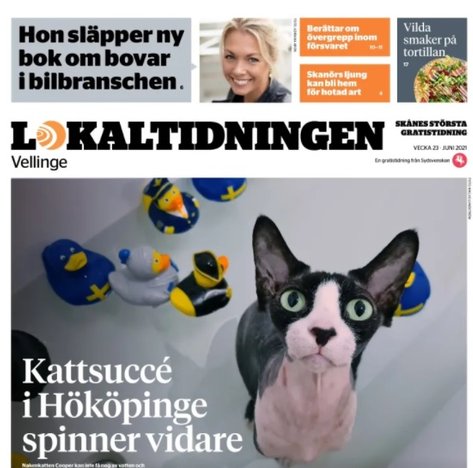 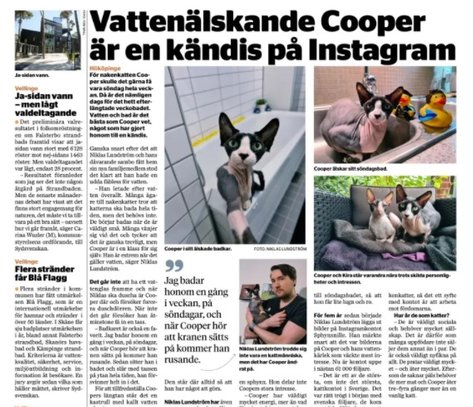 Cooper the nude cat, would love to have Sunday all week. Becuase on Sundays it's time for the weekly bath for Cooper. Water and baths are the best thing Cooper knows, something that has made him a celebrity.

Shortly after Niklas Lundström and his ex partner got their new family member home, it became clear that he had an odd love for water.

"He was searching for water everywhere. Many owners of nude cats believe that the cats should bathe all the time, but it is not necessary. They start bathing when they are kittens. A lot of nude cats get used to it and think it's ok, but Cooper is in a class of his own. He is extreme when it comes to water," says Niklas Lundström.

You can't have a water glass in the apartment and when Niklas is going to shower, Cooper is there trying to force the shower door. When that's not possible, at least he's trying to get a paw in.

-The bathtub is also a favourite. I bathe him once a week, on Sundays, and when Cooper hears the tap is turning on, he comes rushing. He sits in the bath tub and splashes the water surface with his paw all the time, he completely disappears into it.

To satisfy Cooper, there's a saucepan with cold water on the stove.

He jumps up there and plays with the water. It's always there so he has something to do.

Niklas Lundström also has another nude cat, Kira, which is a Cornish rex unlike Cooper which is a sphynx. She doesn't share Cooper's great interest.

"Cooper has a lot of energy, more than Kira has, so I think she's enjoying her own time when he disappears to the sunday bath."

Five years ago, Niklas Lundström started posting pictures on the Instagram account Sphynxnille. He soon noticed that it was the pictures with Cooper and his love of water that attracted the most interest. Now the account has almost 61,000 followers.

"It is one of the largest cat account in Sweden. It was quite slow with Swedish followers at the beginning, they mostly came from the USA. I think that's because there are so many prejudices against nude cats, so  one purpose with the account is to work against the prejudices."

"They are very social and need a lot of company. That´s why many breeders don´t sell them other than in pairs. They are also very curious about everything. They talk a lot – and eat a lot. Because they don't have fur, they need more food and Cooper eats three or four times more than an average cat."