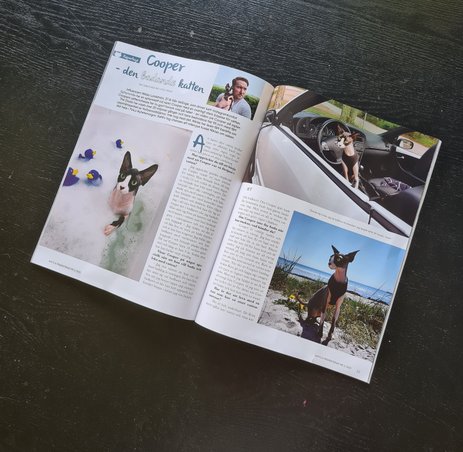 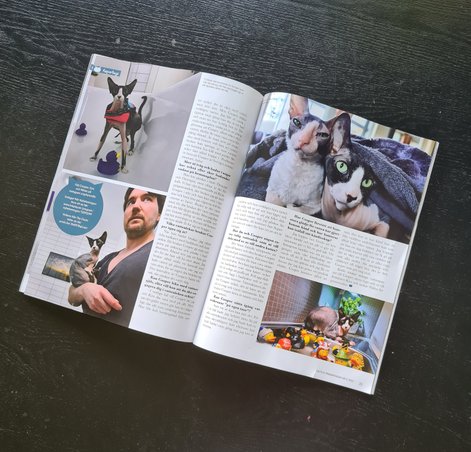 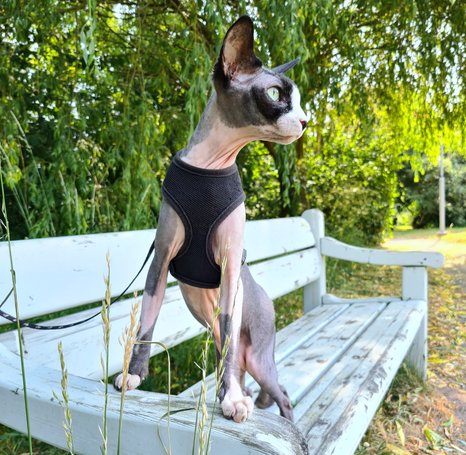 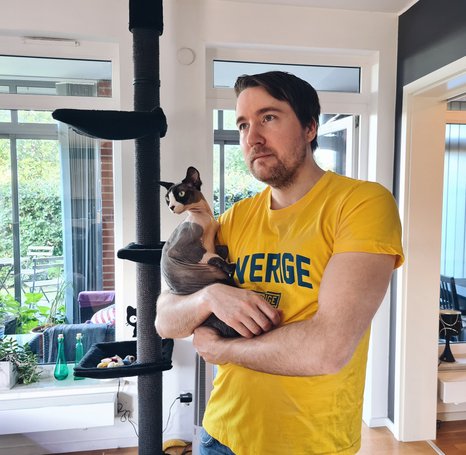 Influencer Niklas Lundström, 37 years old from Vellinge, have the cat Instagram account Sphynxnille. He have a sphynx cat named Cooper with an unusually strong love for water. Cooper's interest in water has now made him go viral online - a video with Cooper on the site The Dodo has been viewed over 20 million times and his bath videos have even got attention from Hollywood stars. And that's not enough, Niklas has also been in TV4's Nyhetsmorgon. Kattliv took the opportunity to interview master Niklas.

That cats hates water is usually a well-known truth, but no rule is without exception.

How did you discover that Cooper was in love with water?

- I discovered quite immediately that Cooper showed a great interest in water. He moved in with me in week 15 and the first days he started playing with water. It started with all the water glasses, he played with the paw in them. After that it continued with pots (withcold water) and the sink. After a few days in his new home, he jumped into the tub when I was bathing. He first sat on the edge and played with his paw in the water as he used to do in the water glasses and after that he jumped in the tub. I thought it's time to try bathing him and see how he reacts. I filled the tub with hot water and he jumped in and started splashing right away. At that time Cooper was only 16 weeks old and today he is 9 years old. Since then, he has been bathing every Sunday.

Does Cooper show in any special way that he wants to bath and play with water?

- I think he knows that his bathing day is Sundays, because he usually sits next to the bathtub and waits. When I start filling up the water in the bathtub, he gets excited and tries to jump in before the bathtub is full of water. If Cooper himself had been allowed to decide, he would have gladly bathed every day. But the rest of the week he has to content himself with knocking out my water glasses and making waves in the sink.

If Cooper is not allowed to bath when he wants, what happens then?

- Cooper is very restless and has lots of energy. I can notice that he gets calm and is happy when he bathes. Sometimes there is no time for his bath. I notice on him that all the energy is used on me and his best friend Kira who is a cornish rex. Kira is not as interested in water as Cooper. When it's Cooper's bathing day, Kira usually goes to bed and enjoys the peace, haha. We help each other get Cooper's energy out of his body. She probably thinks it's wonderful when Cooper bathes and she can sleep.

What is it like to live with a cat that has such a great interest in water?

- It's absolutely wonderful. Most cats do not like water and some cats think it is okay with water. But Cooper really loves water. I get so warm in my heart every time he takes a bath and you see how happy he is. The only thing to keep in mind is to never forget that Cooper is always looking for water, so you have to be extra careful sometimes. If you are on the beach with him and he sees water, he usually runs to the water and with swimming pools he always tries to jump in. The only problem is that Cooper is Sweden's worst swimmer, haha!

Do you go and swim in the ocean as well or does the bathing only take place at home?

- He has splashed in both the Öresund and the Baltic Sea, but it is usually too cold. We have our favorite place on Kämpingestranden, where I usually go with Cooper in a harness and he can sit for hours and just watch the waves and be fascinated by the sea. Swimming pools are worse, because it is usually warmer there and it gets deep right away. But I never let him out of my sight and I have also bought him a life jacket if he should jump in.

What water games does Cooper usually do?

- When he bathes, I usually fill the tub with bubbles and rubber ducks. Cooper usually walks around and touches the ducks and splashes in the water. Sometimes I think he does it because he wants more bubbles. I always put a pot of cold water on the plates when I used them, so that no one gets burned. That pan is Cooper's best toy, he splashes there every day.

Can Cooper play with the water himself, or does he want you to get involved in the water game as well?

- In normal cases, Cooper wants me and Kira to be involved in everything. But when it comes to water, he goes into a situation where everything around disappears. He becomes completely disconnected from the outside world. One funny thing is that when he sleeps and he hears me fill the sink with water and I splash a little with my hand, then he comes flying like a rocket because he knows it's playtime.

Do you and Cooper have an extra fun water game that you want to share with other cats?

- There are actually mini swimming pools to buy for cats and Cooper usually plays with it in the summer. Because he splashes so much, he has to be outdoors with it. I can actually suggest rubber ducks that some cats find funny. Fill up the sink and put in rubber ducks and see if the cat shows interest. Cooper also loves the tap, just turn on a weak and hot jet of water. Cooper plays with his paw in the water jet.

Can Cooper start water taps "on his own paw"?

Has Cooper understood that his great joy for water has made him famous and if so, how does he handle his celebrity?

- I hope he understands that he has become a celebrity and that everything we do together we do for a good cause. Our Instagram is not about making money, our celebrity is used to get rid of all prejudices that exist about the sphynx and that I get a forum to talk about mental illness. Cooper will always be Cooper, no matter how famous he becomes, the world's most wonderful cat who is always searching for water. I hope one day he will walk the red carpet and show the world that it's okay not to look or be like everyone else. To use his differences for something good, it's the Cooper that makes me proud.

Kattliv wishes many water kisses to Cooper, more peace and quiet to his friend Kira and thanks Niklas for the interview.