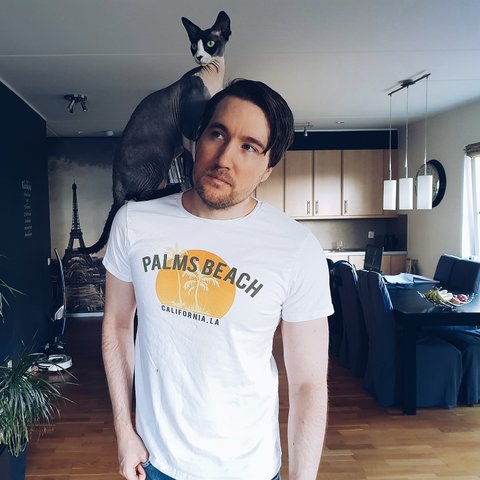 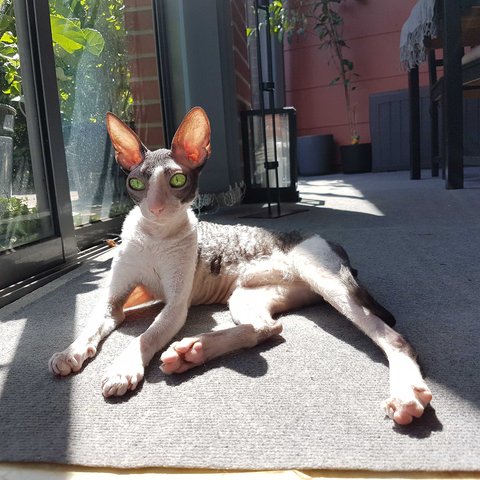 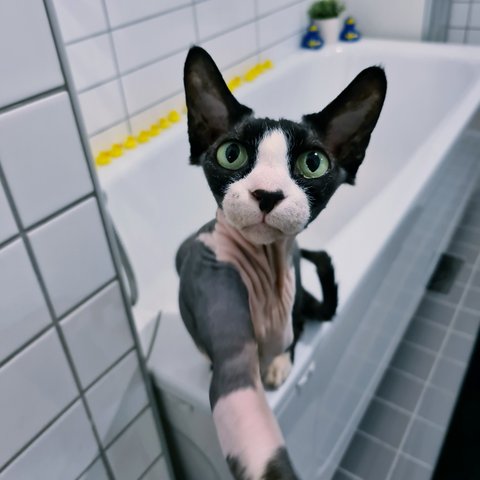 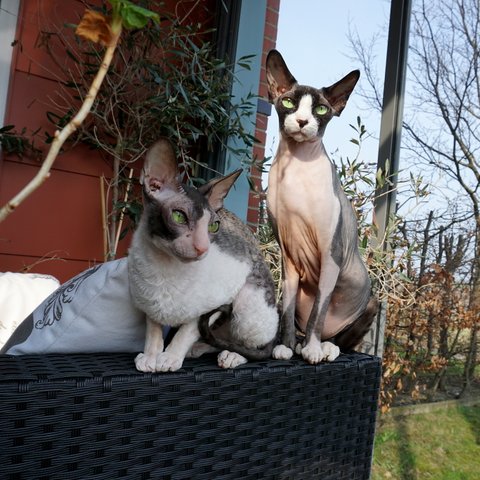 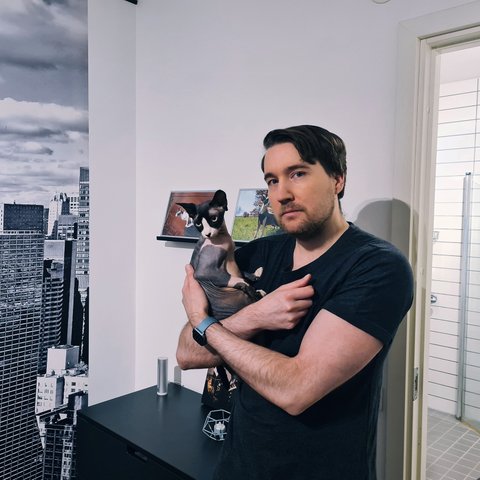 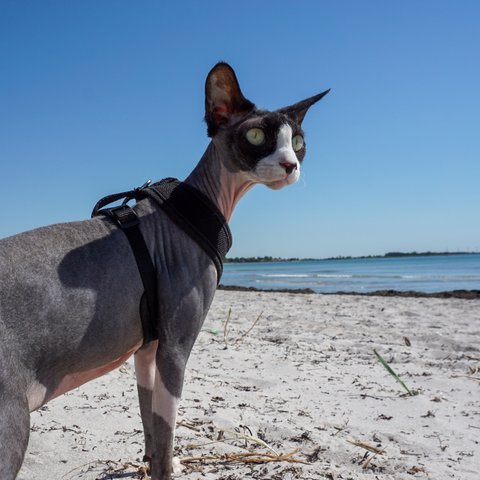 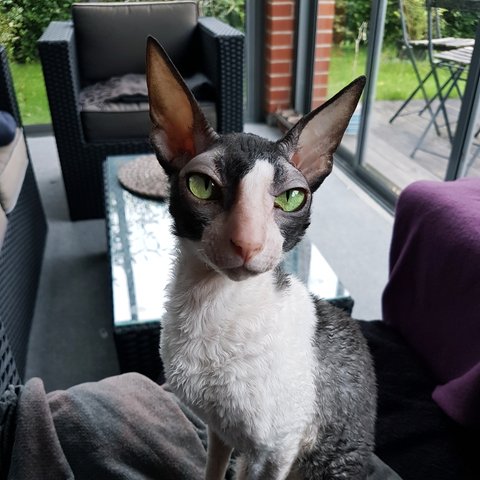 Niklas is the cat influencer from Vellinge municipality who never really wanted a cat from the very beginning, but from a previous relationship slipped into the whole cat thing on a banana peel. Nowadays he is crazy about his sphynx cat Cooper and his rex cat Kira and runs an instagram account with almost 100,000 followers.

Kattliv has previously written about Niklas and his cats Cooper and Kira in the article "Cooper and Kira are making a success on Instagram" in no. 4/2017. In 2018 Niklas himself wrote the article "Niklas lost the joy of life – Saved by Cooper and Kira" in Kattliv no. 5/2018, and now in 2021 he has also written the chronicle "I defend my cat" in Kattliv's newly started sister magazine Kattliv Presents No. 3/2021.

Earlier this year, Cooper also got some pages in Kattliv Presenting No. 2/2021 under the headline "Cooper – the bathing cat" because he is so fond of bathing that he would bathe every day if he could. Videos of Cooper's bathing have now spread like wildfire throughout the internet and out to other countries.

When we at Kattliv this time contact Niklas for an interview, it will be via hangout on the computer, quite late at night. Having previously shifted between day and night, Niklas now works the night shift as a correctional officer at Trelleborg Prison and never changes his circadian rhythm when he becomes off work.

– I like to have it like that, the evening and night is my best time, says Niklas.

We are incredibly curious about how everything works when working as a correctional officer in Sweden and hope that we do not offend him with our many questions about his job. We ask, among other things, if it looks like the Netflix TV series Orange is the New Black, this is probably pretty much what we see in front of us. However, we get the fast answer back that it really doesn´t.

Firstly, he works in a jail, so there are only those who are suspected of crimes, no one has  been convicted of having really committed any crime. Secondly, it is part of the Correctional officer job to accompany the suspects to the trials IF it even gets to the situation that there will be a trial, in some cases there is no evidence and then the suspect goes free.

– Many people think that it is police officers who accompany the suspect to the trial because that is what you see in American movies and TV series, but that is not how it works.

We wonder if he even sees the inmates at all when he's working at night, they might just sleep then. Niklas tells us that Trelleborg's jail is a rather old building that has common toilets in the corridor. Had it not been for that, many people would have stayed in their room all the time and then Niklas might not have seen so much of them.

– Newer prisons usually have toilets inside the rooms," explains Niklas.

Niklas also got into career path on a banana peel, it started with him working extra as a strength training instructor as a 19-year-old with a guy who also worked at the jail and used to tell Niklas about his job there. When Niklas had graduated from high school and had no other clear career path to follow, he decided to contact his strength training instructor colleague to see if there could be any entrance for him to work at the jail. And it did, now Niklas has had this job since 2002 and thinks it's the dream job for him, but he's careful to point out that everything is based on you having good colleagues who know what to do and when to do it and always stick to protocol.

– At the prison, a situation can go from 0 to 100 before you have time to blink and then good colleagues mean just about everything to make you feel safe at the workplace, says Niklas.

While we've been talking about Niklas' job, Cooper has wandered off and huddled together to snuggle it up under a blanket. When Niklas points the computer's camera at Cooper, it looks like Cooper has created a small cozy cave. Outside the blanket cave, Kira rests contentedly.

– If you find one of the cats, you will always find the other, they are completely inseparable friends in a very special way from day one when they met. Never have they been  loggerheads, not a single day, says Niklas.

Kira loves to play with the laser pointer, she is very active and playful in the summer, but in winter she almost goes into intohibernation, niklas says and laughs. And when she plays with the laser pointer, Cooper knows it's "her" playtime, so he shows her respect by not breaking into it, and patiently waiting for his turn. Cooper's favorite games involve cat teaser stick and when he plays with his cat teaser stick, Kira shows the same respect back and allows him to play with them in peace, niklas explains.

We asked Niklas and Kira if they have any hobby that is as strong as Cooper's interest in water, Niklas says that Kira likes to hunt spiders and other bugs. Niklas himself has a great fascination with cars, Saab cars.

– I'm a big Saab nerd, niklas says. A Saab that suits every season, he thinks is good to have. Recently, after he has started his Instagram account, he has also invested in better cameras to take better pictures, so now I have to admit that photography has also become my hobby, says Niklas.

Niklas grew up outside Malmö (south Sweden) in the small town Höllviken in Vellinge municipality. Now he has a different place of residence, but he still lives in Vellinge Municipality. As a child, he never came into contact with cats, and not later in life either. He had guinea pigs, hamsters and aquarium fish as pets growing up, he never interacted with cats, so when his ex partner wanted to get a cat, it wasn't exactly like Niklas was cheering with happiness over this.

But if it were to happen, Niklas was clear that it would be a social cat that you wouldn't

have to vacuum after all the time. The sphynx became the best choice and they found one on the sale site "Blocket". It was a Russian who had bred Cooper, and Cooper has a pedigree, but it didn't arrive until a few days after Cooper had arrived at their apartment. This cat purchase took place in 2012 and was Niklas first big cat experience.

– We didn't know how to buy a cat, and considering that a Sphynx cat is quite expensive in purchases, I would probably have been quite stressed if a cat purchase had been made like this today, says Niklas thoughtfully.

Niklas continues to describe the cat purchase as the woman being a serious cat salesman after all, we were warned that Cooper probably wouldn't enjoy being a lonely cat. Soon we noticed Cooper's large energy supply when we got home so it didn't take long time before we started searching for another cat.

They found the Cornish rex cat Kira a few miles from their home. Kira was gently introduced to Cooper at home in the apartment from the transport cage, but since the cats did not yell at each other or show other signs of disapproval, the breeder thought they could let Kira out of the cage. It went perfectly well, she got a warm welcome from Cooper and although the cats are quite different from each other, they still liking each other on a larger level than just accepting that the other is there. They simply want to do everything together.

– If one has to go to the vet, the other stands at the door and waits until the friend has returned to home again, Niklas mentions as an example of the cats' unusual friendship. Cooper immediately became a much calmer cat in Kira's company, Niklas continues.

When asked how the cats got their names, Niklas replies that Cooper had the name Cooper in his pedigree and Niklas is a fan of Sheldon Cooper in the American TV series The Big Bang Theory, so Niklas thought Cooper should keep his name. Kira was named by Niklas ex partner and since Niklas had already decided Cooper's name, he had nothing to say when Kira got her name.

The trio consisting of Cooper, Kira and Niklas live since 2009 in the same apartment they have always lived in ever since the cats came into Niklas life.

– We live on the ground floor with a glazed conservatory, and there the cats enjoy sitting all summer until it gets a little cold, niklas describes and continues to explain; When summer is over, cats with little and no fur would rather be indoors again.

But these cats are not only social to each other, they also give Niklas a lot of attention. A funny thing, every time I brush my teeth with my electric toothbrush, they want to be involved by sitting on my shoulders, says Niklas. And this happens every time I brush my teeth, as soon as I take the electric toothbrush out of the charger, Cooper hears the click and rushes towards the toilet with Kira in the haste, Niklas continues.

2016 was the year niklas started his Instagram account, with the simple purpose of saving his friends from all cat pictures on Facebook. Nowadays, there is a lot of time spent photographing and editing and selecting pictures, about four hours per day it actually takes to this. And Niklas has also given feedback to every DM that he has received. He calls himself a perfectionist and previously he never posted a picture on his Instagram account unless he thought it was perfect in every way.

– Nowadays I can post a picture that may not have the perfect sharpness or the perfect background, but if the image still gives the right feeling that I am looking for, I can accept that not everything is perfect, niklas confirms.

All influencers think it's important what they upload for material, but a lot of influencers just upload becuase they want a lot of material on the account and that it should be visible that they are active. I take a lot of pictures myself, but I don't post many of the pictures that have been taken.

– It is important to me that all the pictures/videos that I upload is posted for a special reason.

Niklas' colleagues follow him on Instagram and push him very much, they thinks its funny with his cat interest. They probably think that at least it's something good for him given the depression he got in 2016.

Niklas has many American followers and they don't seem to have a lot of strange opinions and think anything special about Cooper being of the breed sphynx, but for some strange reason there is a resistance to sphynxes in Sweden, niklas says.

– One of the goals of my Instagram account is in the present day to reach out all over the world and raise the status of the sphynxes, Niklas concludes.

In addition to this, we can reveal that Niklas will also be a Kattliv columnist next year. Some of our readers have contacted us and thought that there are too few men who write in Kattliv so we are happy that Niklas will write for us next year.

We thank you for a pleasant interview and wish you all the best in continued to raise the status of cats.