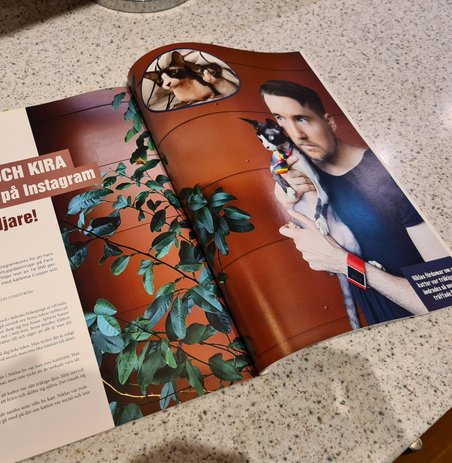 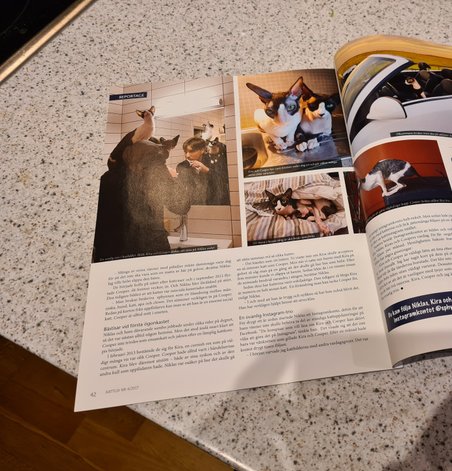 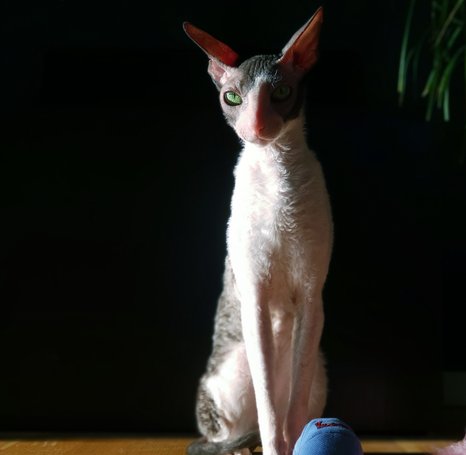 When we sit down at Niklas kitchen table in Skåne Hököpinge, both cats want to be involved. Kira, a green-eyed Cornish rex female, smells curiously at me and the camera before she sits down in Niklas knee. Sphynx male Cooper has already jumped into my lap. After a while Cooper climbs onto my shoulder. Niklas laughs and says that this is normal.

- Cooper's going to be on you all the time. He thinks it's fun with new people. Kira is also social, but not as intense.

Before Kira and Cooper came into Niklas' life, he was not a fan of cats. He had met friends cats, but did not find them very exciting.

- I had a picture of cats being pretty boring animals. My impression was that they mostly slept in a corner and looked after themselves. Turns out I was completely wrong.

It was Niklas ex partner who wanted a cat. Niklas was hesitant but said he could agree to it if the cat was social and did not have fur.

Many of my friends with ”normal” cats have to vacuum every day and I hate to vacuum, Niklas laughs.

They started searching online for cat breeds and in September 2012 Cooper, fifteen weeks old, moved in. And Niklas felt in love directly.

- Sphynx is usually described as a mixture between human, dog, cat, monkey and clown. That's certainly true of Cooper. The photos from the breeder you can see that he is a social cat.

Niklas and his ex partner worked at different times of the day, so there was always someone at home. But it soon became clear that Cooper couldn´t be alone, so we had to start searching for a cat friend to him.

In February 2013, Kira moved in, a Cornish rex who in many ways was very different from Cooper. Cooper had always been at the center of the action. Kira, on the other hand, was ostracized by her siblings. Niklas was unsure if it would be possible to put together two such different cats.

- It felt like a lottery. We certainly didn't know if she would accept such an intense cat as Cooper. But when we put the cage with Kira on the floor, we saw that it was love directly. After five minutes, we let her out. After that they played for an hour before falling asleep next to each other in bed," says Niklas.

Since then, the cats have been inseparable. The previously shy Kira is now a completely different cat. A change you can thank Cooper for, says Niklas.

- Because he's safe and curious, she has learned from him. He's really helped her to grow.

Just over a year ago Niklas started an Instagram account, partly because his friends would not have to take part in constant cat updates on Facebook. "Friends who want to read about Kira and Cooper can actively choose to do so on Instagram,". It turns out it wasn't just the circle of friends who liked Kira and Cooper. After a month, the account had just over a thousand followers.

- In the beginning I uploaded cat pictures and common everyday images. Simply it was a regular Instagram account. But when I posted a photo with the cats I got a lot of followers in one day. So it became a cat Instagram instead.

Nowadays, Niklas only uploads pictures / videos of their everyday life together with the cats. They get about 1,000 new followers per month.

The secret of success?

Niklas has some guesses:

- Kira and Cooper are very easy to photograph because they follow me all the time. I've taken pictures of them on the beach and filmed them when they get their teeth brushed. It will not be the same kind of pictures all the time it´s very varied. I think there are more women who have Instagram accounts with Sphynx and Cornish Rex than men. Kira, Cooper and I are simply a slightly unusual trio.