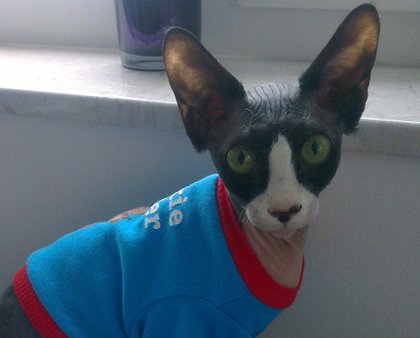 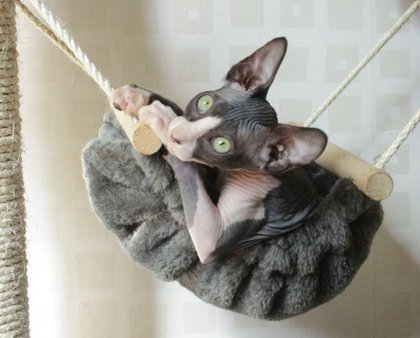 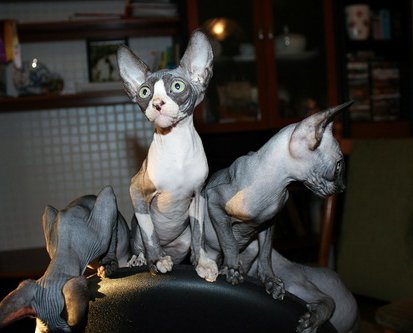 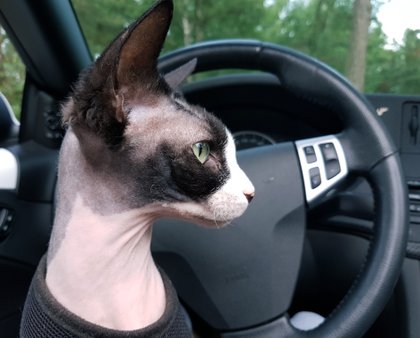 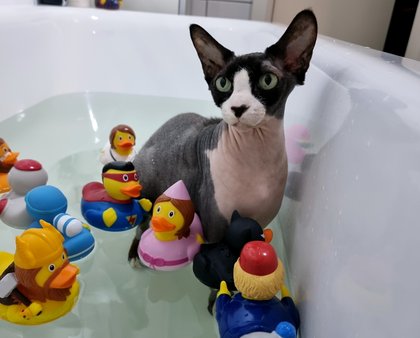 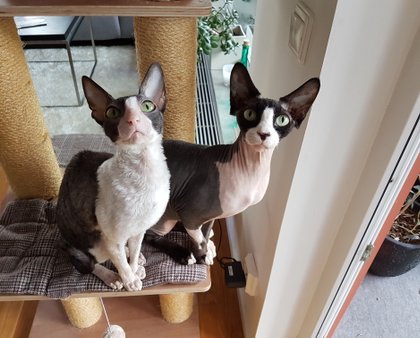 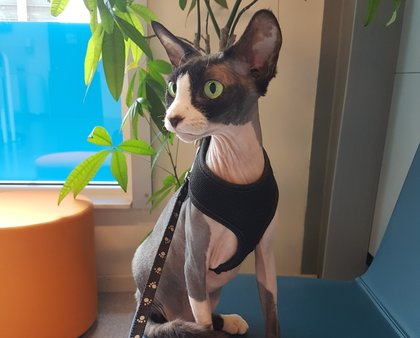 How can I summarize 10 years in Cooper's life? So many things have happened in his life and in our lives along the way, both positive and negative. I wouldn't have any problems writing an entire book about Cooper's adventures, but it may be a project in the future. Therefore, I will try to choose some specific parts in his life that have been crucial for both Cooper and me. Cooper was born in May 29, 2012 and what I heard afterwards from the breeder was that Cooper was a wonderful kitten with extremely much energy. He would greet everyone and always wanted to be in the center.

Our story began on Saturday, September 8, 2012. That day my ex-partner (in the rest of the post her name is Josephine) told me that she wanted to get a cat. As most people know, I was not a cat person before I got a cat myself. I thought cats were boring and I didn't understand why you should get a cat. Therefore, a big persuasion from Josephine was needed to convince me to let in a cat in our apartment. At this point in my life, I worked quite a lot and she told me that she felt lonely sometimes and that a cat would help her.

I was probably not difficult to persuade because I was still in the ” honeymoon phase” and everyone knows that you say "yes" to most things in this phase. I made two demands on the cat, that it shouldn't lose fur and that it should be a social cat breed. I didn't know much about cats and thought that these requirements would take some time to find and after that maybe Josephine was already tired of searching after cats. But it didn't take many hours before she had found a Sphynx who was ready to move.

His name was S*Beau Monde Cooper and now you can figure out who she had found, it was the bath king Cooper. After that everything went very fast, Josephine called the breeder immediately and they decided to meet already on Wednesday 12 September. Since I worked this day and really had no major interest in getting a cat, Josephine herself had to take the train for 5 hours to meet Cooper. We decided that I would meet them in Malmö (20 min away from where we live) with the car in the evening of September 12, 2012. It's not often you remember what the weather was like on a specific day, but this evening it was cold, rainy and windy. Summer was over and autumn was approaching.

I sat nervously in the car and didn't know what would meet me, what had I really agreed to. I started thinking about what we would do if it didn't work with a cat in our home. I told myself that it was always possible to relocate the cat if there were any problems. When I sat there and was thinking of various evasions to get rid of the cat, Josephine jumped into the car. Terrified, I looked down at the cat cage and asked where the cat was and at the same second I said this I saw a tiny cat's head sticking out of Josephine's jacket. I saw his big curious eyes looking at me and I looked at him, from that second I felt in love with Cooper. I saw that Cooper wasn't interested at staying in the jacket, he wanted to say hello to his master as well. Josephine gently opened the jacket and Cooper flew out and sat on my lap. It didn't take many minutes before he fell asleep in my lap and there he lay the whole drive home.

A few months later Cooper had a strange cough and of course I was worried. After some google searches, that didn't really calm down. We booked an appointment with the vet for a checkup. They did a routine examination and couldn't find anything on it. Therefore, the vet thought we should x-ray him to make sure it was not a serious illness. Cooper didn't really understood what was happening and he was as happy as usual. But I remember when I went out from the vet that I thought, this is something serious and we will never see each other again. Josephine and I sat all day waiting for the call from the vet and it was one of the longest days of my entire life. Although I only knew Cooper for a few months, I wasn't ready to say good bye to him.

Josephines got a phone call in the afternoon and it was a very fast call. The same second she ended the conversation, she lay down on the floor and began to cry. I could figure out that the message wasn't good from the vet and at the same time I couldn't get a word out from Josephine. But when she calmed down a bit, she said that they had seen on Cooper's X-rays that he had an enlarged heart and reduced lungs. I recognized these symptoms from my google searches, it's HCM. It is a disease that means a fast death and sometimes a painful death. Josephine told me that we got an appointment the next day to another animal hospital for an ultrasound of his heart and lungs.

Cooper loves adventure and new places and I remember when he ran around in the waiting room and greeted everyone. He was completely unaware that his life might end that day. Nervously we went to the vet and sat down. He explained to us what they had seen on the X-ray and that they would now do an ultrasound, a more detailed examination compared to X-ray. Cooper didn't care at all about all the wires and appliances he was connected to. He saw this as an adventure just as he does with everything. When everything was ready, the vet went out to look at the ultrasound and inside we sat nervously and waited. After a few minutes the vet came back and I looked at him and he at me. His body language made me even more worried and I thought that now we will have to end Cooper's life before he even grows up. You probably already know what answer we got from the vet. "Everything looked good on the ultrasound and Cooper has absolutely perfect lungs and heart." Going from disaster to this joy, that feeling I can still live on.

We were told by the breeder that Cooper probably wouldn't like to live alone without a cat friend. We noticed quite quickly that Cooper needed a cat friend. We played a lot with Cooper and tried to get his energy out, but it wasn't enough. So Josephine and I sat down at the computer, this time together. This time I also had a great interest in getting another cat. We found S*Pemico's Marry the Night, a small Cornish Rex female. You can probably figure out that it was Kira. She was a very shy kitten that none of the other cats in the house liked. Therefore, I knew she would have the best life with Cooper, because he loves everyone. I was right, Cooper opened his heart and "his" home to her immediately. Today they are inseparable as you probably know. These two cats with completely different childhood have found each other in each other's differences.

In December 2015, my relationship with Josephine ended. Luckily, we had already written over the cats to me in 2014. Therefore, there was no discussion about who would keep Cooper and Kira. They were allowed to stay at my home and it was lucky for me. Because in January 2016, I got an acute depression that after a while turned into anxiety and worry.

I'm grateful that Cooper and Kira stayed in my life. Because it was really bad with me and I found no joy in life anymore. I especially remember one special occasion with Cooper, it was the spring of 2016. My life was very deep at the bottom. I looked at Cooper and said to him, "It's your fault that I don't end everything." He looked back at me and jumped up to my lap and rubbed his whole face into my beard. I'm so incredibly grateful that Cooper made me realize that I actually have two best friends here at home who need me and who would have missed me in their lives.

At the same time as I was in an acute depression, I started our Instagram (January 2016). The idea from the beginning was that I would only post pictures/videos of training, cars, nature and myself. But after a week or so, I uploaded the first image with Cooper. That picture was liked by 20x more compared to my other pictures, we also got many followers immediately. Then I realized that it is better that Cooper and Kira take over my Instagram. Our first interview was in the spring of 2016 with the magazine "Sydkatten" it was about how it all started. But should I pick out two memorable interviews for me and Cooper, it's ”The Dodo” and ”Nyhetsmorgon” with Jenny Strömstedt.

The Dodo made two films about Cooper's love to water. These two films currently have over 40 million views. They have been noticed by Jennifer Aniston. For all of you who have seen "Friends", you know that Jennifer Aniston has recorded an episode with a Sphynx named Mrs. Whiskerson. The other big interview we did was with Jenny Strömstedt in Nyhetsmorgon. The difference was that this was live TV. It all started well and Cooper sat nicely on my shoulder. But after 1-2 minutes, Cooper moves on my shoulder and shows his ass in the camera.

I can't summarize Cooper's 10 years life without writing a bit about his love to water. For me, it is normal for a cat to love water. But I can understand that it doesn't really look like this in other homes. Cooper showed interest in water immediately when he moved in. When he was a kitten, I couldn't water the plants without him flying over the floor and poking his paw into the water.

As an adult, he has understood that it is not so appreciated, instead he now always has a pot of cold water that he can splash in whenever he wants. But as you all know, his best day is Sundays when it's bathing in a bathtub. From the beginning, Cooper didn't bathe once a week. But now I prioritize Cooper's bath before other things. Is there anything more important in life than Cooper's bath? No, there is nothing more important, says Cooper.

Our life together has had its ups and downs, just as life should be. But the most important thing is that love always wins. Even if it is "just" love from a little naked cat.

If you had the strength to read this long blog post, me, Cooper and Kira would like to thank you who follow us and like/comment our posts! It means a lot! Because without you, Cooper would never have reached the whole world and what a boring world it would have been.

Love from Cooper, Kira and Niklas