Who is the boss in the house? 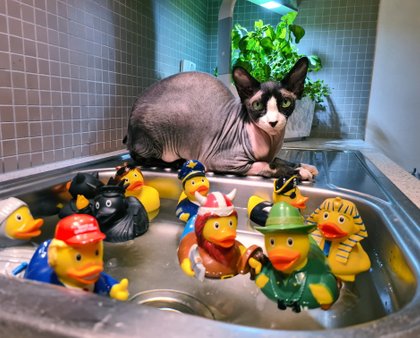 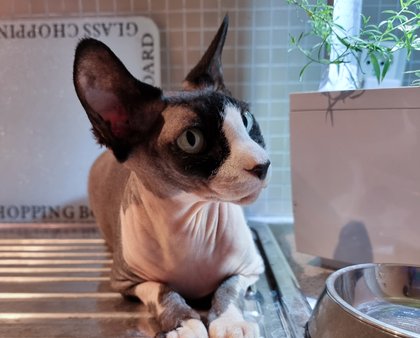 I had a thought when I got a cat that I was the boss in the house and the cat would never be allowed to take over my home. Many of you probably had the same thought as me before getting a cat. But I think we all agree that we weren't even close to being the boss in our home. And it didn't take many seconds before the cats took over the leadership.

The first rule I set up was no cats on the sink, only food and dishes should be there. It worked well at first when Cooper was a kitten. Because he was too small to jump on the bench. He made a few valiant attempts to jump up but he failed every time. A few months later I was going on holiday and my dad was looking after Cooper. A week later when I picked up Cooper, the first thing I saw was a Cooper sitting on my dad's sink. He looked at me and I looked at him, you could see in his eyes how pleased he was that he finally managed to overcome an obstacle to conquer our home. My hope when we got home was that he wouldn't do the same thing. But you have probably already figured out what happened. As soon as he saw the sink, he flew up to it and sat down.

Cooper was alone at this point but Kira moved in just a few months later. The difference with Kira, compared to Cooper was that she listened to everything I told her and she was embarrassed when I rebuked her. And the other cat just laughed at me every time I tried to set rules in the home.

At this point I had already seen myself defeated by the sink cats. Because forbidding Kira to sit there when Cooper kept flying up on the sink was never an option. Instead, I tried to figure out how I could maintain order with all the other rules in the home.

Before I got a cat, I had decided that when I ate, the cats would be down on the floor and never near the food. I imagined like a dog that, in the worst case scenario, was sitting below and begging after food, here I surrendered immediately. Kira has never tried to steal food from me because I told her once when she was a kitten. But the other naked cat has probably stolen a few pounds of food from me over the years. He is an expert at sneaking under the table and the next second the paw comes at 200 mph and hits the food on the plate so something falls to the floor. Before I even have time to react, Cooper is already on the floor and eating ”his” food. This has gotten better over the years and he doesn't steal nearly as much food as he did a few years ago.

My dad always used to say "You don't need a TV when you have Cooper and Kira". Living together with a Cornish Rex and Sphynx is sometimes organized chaos. Where I stand for organizing and the cats for the chaos. Those of us who live with cats love this, but for someone who has never lived close to a cat, it can be a terrifying thought.

I love every day with the cats. It's worth every single hole in the clothes that my two clothing designers create by climbing in my clothes. I think most of us cat owners probably are used as climbing trees. Even if we buy 100 scratching post, the humans would still be the best cat tree in the apartment.

But we let the cats be the bosses because we love them and usually we get a good laugh out of all the craziness they get up to and that can be needed in this world we live in right now.